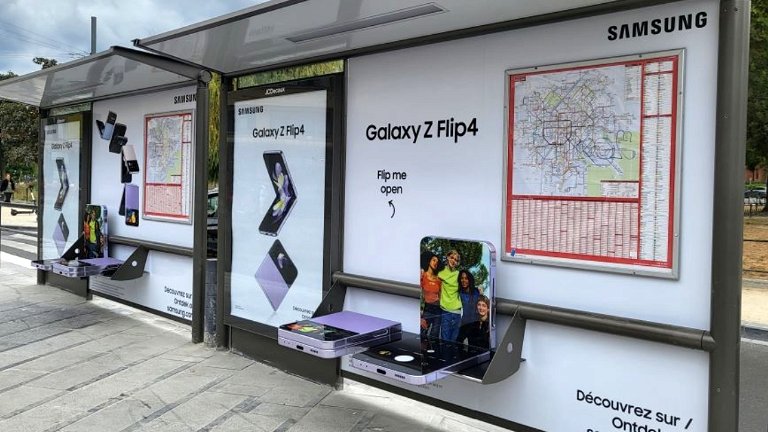 We know that Samsung advertising campaigns never go unnoticed, with various Apple mocks included. However, it seems that with the Samsung Galaxy Z Flip 4 5G announcements they are gone a step further in terms of originality. If you go down the street and you come across one of these advertisements, the most normal thing is that you stop to look at which mobile it is, since they are particularly striking.

Samsung itself has been responsible for the collection on its website the most creative advertisements with the new folding mobile as the protagonist. We can tell you that they are the most curious, even with some of them you can sit at the terminal itself. It doesn’t appear on this list, but the marketing campaign for the Galaxy Z Flip 4 5G also pierced Apple with a spicy ad.

Seats at a bus stop

The Samsung Galaxy Z Flip 4 advertised at a bus stop.

Waiting standing at a bus stop is not pleasant, so Samsung thought of create the most original seats that we have seen so far. S’inspirant du design pliable du Samsung Galaxy Z Flip 4 5Gthe firm has modified the seats for this stopover in Belgium to give them a… different touch.

As you can see, both seats are shaped like the Galaxy Z Flip 4 5G. if you want to sit downyou just have to do the same as when you are going to use the mobile, i.e. open the lid. In this case, the top of the screen will act as the back. When you leave, you just have to close the lid and leave the terminal completely folded, like when you carry it in your pocket.

According to Samsung, this campaign started on August 26 and was available for about a month. It happened in five different placesfrom Brussels to Antwerp.

Another of the most prominent Samsung Galaxy Z Flip 4 5G announcements took place in Rio de Janeiro and São Paulo, the two Brazilian cities. With the slogan “Life seen from the best angle”, Samsung has placed several models of the terminal produced on a large scale in the busiest areas. On the one hand, one of the phones showed the selfies that users have uploaded to the network using the hashtag #GalaxyExperienceRJ.

On the other hand, there were several Samsung Galaxy Z Flip 4 5G located in clocks spread throughout the city open and close automatically to show how the folding mobile works. Both forms of advertising are very curious, they surely caught the eyes of passers-by.

Photographs in the water to show resistance

As we explained in the Samsung Galaxy Z Flip 4 5G review, the phone is water resistant. To prove it, the managers of the marketing campaign in Japan decided toIntroduce it to a water tank with several fish. The results were so beautiful and artistic photos like the ones you see in the image above.

According to Samsung, this announcement caught the attention of thousands of people, with some 240,000 likes in just 20 days. The advertising campaign successfully fulfilled its mission, to obtain the public would like to try the Galaxy Z Flip 4 5G.

A Galaxy Z Flip 4 5G that travels with you

Bus advertising campaigns are very common, although not all of them are as original as the Samsung Galaxy Z Flip 4 5G. Concretely, the idea is promote Flex Cam functionallowing take photos when the phone is half folded and leaning on a surface. In this way, you can take more stable photos and take a selfie in the distance when you are alone.

By placing the mobile screen directly on the glass of the bus, the announcement of the Z Flip 4 so that the passengers themselves are focused by the camera of the terminal. This is the idea of ​​this advertisement, which started on August 22 in Prague (Czech Republic).

The Samsung Galaxy Z Flip 4 5G drawn with drones in the sky.

Drones have also become mainstream items when it comes to advertising, and the Samsung Galaxy Z Flip 4 5G couldn’t be less. In Taiwan, they orchestrated an activity with 500 drones that caught the new Galaxy Flip and Galaxy Fold in the sky. It was in the lake of the Sun and the Moon and it happened at night to take advantage of the beautiful reflection of drone light in water.

Along with forming the silhouette of Samsung’s two foldable phones, the drones also wrote the word Galaxy in the sky. Although we have seen it many times before, any activity involving the organization of hundreds of drones in the sky still impressive.